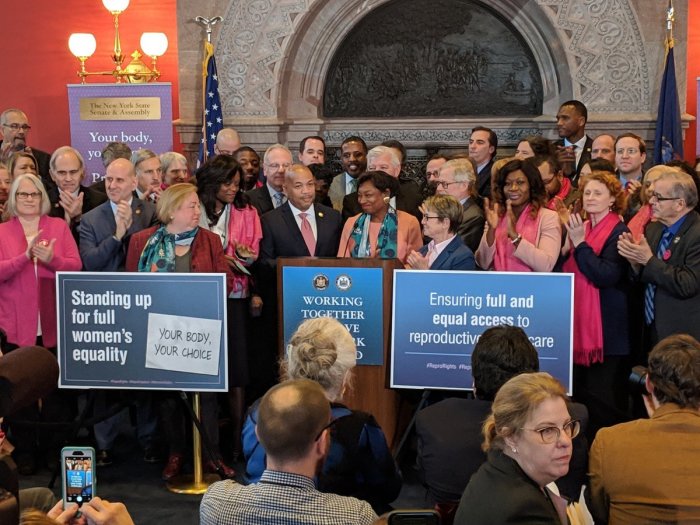 Most Americans don’t want a standing ovation for abortions until birth. But Democrats do.

A standing ovation for abortion? That’s what New York’s Reproductive Health Act got in the Senate chamber when it passed last week. Lawmakers and bystanders stood and applauded a law that legalizes abortion all the way up until birth, for any reason.

The left may be celebrating the bill’s passage, but it is wildly out of step with American sentiment on the issue. American support for late-term abortion continues to decline; one poll last year found that a mere 13 percent of Americans support abortion all the way into the third trimester. And most Americans don’t think abortion is something to celebrate, or “shout” to borrow from the pro-choice lobby’s public relations campaign. A majority of Americans, in fact, say abortion is immoral.

I can only imagine then, that seeing Democrats vigorously applaud abortion for 7-pound babies makes most Americans queasy. The same goes for lighting up One World Trade Center pink.

But the bill did more than extend abortion up until labor pains begin. The bill drops the requirement that only doctors perform abortion and decriminalizes violence against children in the womb. Even if it’s by a woman’s thug boyfriend.

“Safe” … scratch that. Legal and rare? Scratch “rare,” too. In New York City, one in three babies are aborted.

In legalizing and then celebrating the brazen removal of protections for not just unborn children, wanted or unwanted, but women as well, New York dramatized something the left is increasingly struggling to hide: they are only interested in legal abortion, full stop. Safe and rare be darned.

Abortion extremism grows even as use fades out

Strangely enough, the left’s litany of extremism on abortion continues to grow as its political efficacy wanes. Just this month, Democratic leaders in Congress announced they would push to overturn the Hyde Amendment, which bars the use of taxpayer funding for abortion, despite the fact that a solid majority of Americans support it. Co-chair of the Pro-Choice Caucus, Rep. Barbara Lee, D-Calif., promised the “boldest pro-choice legislation in history” and called the new Congress an opportunity to unleash a “a new era of reproductive rights.”

It certainly is a new era, one in which the Democrats are further away from the American people on abortion than they’ve ever been in history, and one in which American views on abortion are more nuanced than ever before. A slight majority of Americans continue to support legal abortion, but primarily in the first trimester, and it’s something that makes them morally uneasy. Democrats who have been tossed out of office for their extremism on the issue can see this.

In a recent podcast interview with The New York Times, former Sen. Claire McCaskill, D-MO, who voted against the 20-week ban on abortion, lamented the party’s emphasis on the issue, saying Democrats should “shut up” about abortion. “It was not an issue that was going to bring me more votes,” she said.

The left celebrates death itself

No doubt former Sen. Heidi Heitkamp, D-N.D., who became known as “High Five Heidi” for her infamous high-five with Senate Democrat leader Chuck Schumer after voting against the 20-week ban, would agree.

Already, the four women who have entered the presidential race for the Democratic party from the U.S. Senate have made their abortion bonafides plain: All are in the New York school of abortion extremism. Sen. Kamala Harris, D-Calif., gets special kudos for her efforts to undermine crisis pregnancy centers in her home state while acting as attorney general, before the Supreme Court stepped in to protect their free speech rights.

What happened in New York last week is somber and tragic. But it was a teaching moment for us all in that it made plain the left’s position on a deeply divisive issue. As the bishop of Albany wrote in a letter to his parishioner, Gov. Andrew Cuomo, pleading him not to sign the bill, “Do not build this Death Star.”

The reality is that the left has moved past building Death Stars to celebrating death itself.